Want to know how you can change the way you feel with Three Words? 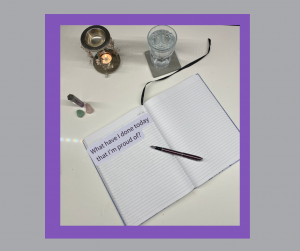 So you don’t journal.

So why would you want to start?

And write pages every day!

Well you don’t have to write pages.

In fact you can achieve insights with only a few words.

A few weeks ago I was invited to share an exercise at a wellness hub. I only had 15 minutes to showcase what I do and impart my wisdom to the participants.

Some of them had never used a journal before.

then I asked them to think of an expereince over the last few days that had caused them to feel sad, angry upset or any other difficult emotion

yes you read that right!

whatever three words popped into the heads, no overthinking or analysing.

Once they had their three words, I took them back into meditation where we released the emotions,

we used the paper we had written on

some visualised it burning

some scrunched and tore it up

some were able to just allow the words to float away

others imagined erasing the words.

Then we wrote a single sentence to describe how we felt about the situation now.

I had so many come up to me at end of the session to say how empowering it was to let go of those emotions and that they hadn’t realised they’d held onto them.

One person told me that she realised that the experience she had used during the exercise had unconsciously triggered emotions from past experiences that had nothing to do with her life now but she that she was obviously still holding onto them.

So you don’t need to be a writer to use a journal.

You just need to know how to use your journal as tool of enquiry.